A teenager who was racially abused but has now found the strength to re-educate his bullies has been honoured as a Mentor in Violence Reduction. 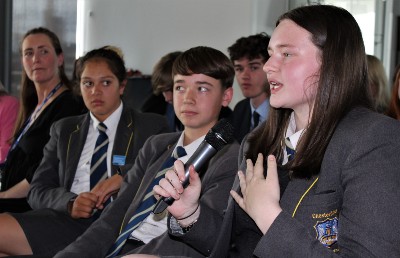 When Joe (not his real name) was deliberately targeted by his peers, his confidence collapsed. Allied to worries that he wouldn’t make the grades he needed for college, the promising would-be head boy began to seriously doubt himself.

But the Mentors in Violence Prevention (MVP) programme, which encourages young people to become “active bystanders” and persuade their peers to look at words and violence through a different lens, gave the would-be scientist the courage to speak-up and even star in an anti-hate crime video.

Which is why along with pupils from across the region, Joe was honoured by two of Merseyside’s leading role models – Police and Crime Commissioner Emily Spurrell and Head of the Merseyside Violence Reduction Partnership (MVRP) Detective Superintendent Siobhan Gainer.

Funded by the MVRP and delivered by the Merseyside Youth Association’s (MYA) Raise Team, the scheme aims to recognise the scope of violence, especially racist, misogynist, and homophobic behaviour through mentors discussing these issues with younger pupils. It promotes leadership skills in not simply walking on by, but challenging in a safe way, and mentoring others to do the same.

For Det Supt Gainer moving away from “snitch culture” was a particularly important component. “Victims should never blame themselves for the offences committed against their person and none of us should feel we have to accept unlawful aggressive behaviour. This whole idea that anyone who reports incidents to their teacher, an adult or the police is a “grass” or a “snitch” must also be dismissed. By learning better values, the mentors are encouraging the next generation to become involved in a cultural revolution. Their impact and example will be remembered for generations to come. I do not underestimate the importance mentoring has in building confidence and making long lasting change”

One of the most important elements of the course is to give young people a voice and learn from what they are saying. A survey released at the MVP graduation ceremony – held at the Museum of Liverpool – showed that issues of concern differed greatly between teachers, staff and pupils. Top of the young peoples’ worries was racism, online abuse, and suicide.

“Although young people know most of the residents in their area, few tell us they feel part of their community” continued Det Supt Gainer, “they believe they are ignored or talked down to. There also seems to be a general mistrust of adults, which all of us need to work on and change.”

Damian Hart, Principle Development Manager of the RAISE Mental Health Promotion Team at MYA said: “Since we launched this programme in 2020, over 2,000 young people have been trained as either mentors or mentees in preventing violence in their schools and the wider community. The success of this programme can be attributed to the peer-to-peer approach and how school staff and young people have embraced the MVP ethos as a whole school approach to mental health and violence prevention.”

Sophie (not her real name) felt silent before she completed Mentors in Violence Prevention. She said: “When I began the programme, I found that the girl I was partnered with didn’t want to talk about upsetting subjects. That’s when I decided to do it myself. I used to be shy, but now I feel confident enough to present in front of 30 people who I think relate to me, because we’re the same age. Some of them even shout after me now, asking for help.”

The programme has ambitious plans and is determined in the next year to reach at least half of all high schools in the Merseyside region.

Merseyside’s Police Commissioner Emily Spurrell said: “It was an absolute honour to help present the awards to these inspiring young people at the Mentors in Violence Prevention graduation event.

“Words are powerful and sadly, all too often, they are used as weapons. It is brilliant to see how this very effective programme has given these young people the skills, tools, and confidence to become active bystanders and safely challenge their peers about the language they use and the potentially devastating impact it can have on others.

“This compelling programme is empowering young people to make their schools and communities safer, healthier places and I look forward to seeing it rolled out more widely across Merseyside.”