Helping them stage a dramatic change. 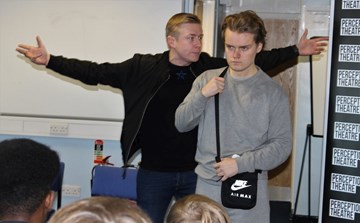 “One of the first acts of any autocrat or dictator is to close the theatres.

Conversely, when he was asked why he was so determined to keep them open during the Second World War blitz, Sir Winston Churchill simply replied, “what are we fighting for?”

The dramatic arts bring people together in the form of an audience. That either entertains or informs, and in the case of truly great theatre, does both. For the artist, it is a hugely creative experience to become another human being. It takes nerve and skill and guts to do it, which in the end brings confidence and personal gratification.

No wonder “the boot stamping on the human face forever” (as Orwell put it in 1984) hates it.

Theatre has massively influenced my middle-aged life. I have more memories and stories to share than most, the notoriety of having appeared on the stage and screen, and a knowledge of myself that only the arts can bring.

So, you may think me a biased observer as I watched the MVRP funded anti-knife crime play, CUT, staged by Perception Theatre. Very possibly. But whilst my attention was gripped by the emotionally intense script and the classy acting, I was also drawn to the reaction of a high school audience who were gripped by this tome, for over an hour.

Indeed, for some, witnessing the tragic tale of Tom and Jay, all proved a little too much and they withdrew, in tears.

A feeling they will remember the consequences

That emotional impact is what they will recall from this experience. As their teacher Toni Darcy told me afterwards: “Young people are not always aware of the consequences of their actions.” The play and its question-and-answer period reminded them that serious knife crime is about more than victim and perpetrator. It’s about the grief brought to their brothers and sisters, their friends, their grandparents (who they may be closer to than their parents) and yes, their teachers.

Take to the stage

Every actor had a lightbulb moment when they not only fell in love with the art but believed they could do it, themselves. My hope with CUT is that it inspires young people to do the same.

As with lots of professions, theatre is under-represented, and class riven. That means that if we are not careful, we will be deprived of important voices.

Everyone from Bradford playwright Angela Dunbar to Salford’s Sheelagh Delaney and Albert Finney have contributed so much to theatre. And it is worth remembering that even the Bard himself, William Shakespeare, came from a modest background and had a West Midlands accent!

Perception could therefore conceivably provoke new thoughts on serious violence, imbue young people with a love of the theatre and get them involved with something that could boost their self-confidence and communications skills.

There are people who do their best to denigrate drama’s impact – and I could fill three blogs on that subject. But for me, the likes of Perception should take an extra bow as they are applauded to the rooftop for changing minds and lives.”

Pete Gibson is our Comms Lead and an actor who has appeared as Alan Bennett at the Edinburgh Fringe and as the boss in a car company’s TV advertising campaign. He is the new Chemtrails video too, as an oddball fan of the band!