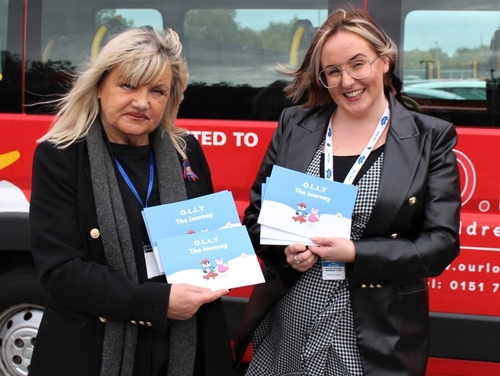 A woman who had the hellish prospect of telling her grandchildren their mum had been murdered, has penned a children’s book to aid others in the same boat.

Brave Jean Taylor turned the grief she felt at the shattering death of her daughter Chantel into a charity called O.L.L.Y (Our Lost Loved Years) where Merseyside children who have had a homicide in their family, can share activities, days out and most of all, their feelings.

And with funding and support from The Merseyside Violence Reduction Partnership, Jean’s new illustrated tome about a loveable penguin facing loss, “The Journey”, will now be distributed to police officers and others working with children of murder victims.

One of the chief aims of the project is to prevent those whom Jean calls “forgotten victims” from falling through the cracks and becoming embroiled in violence, themselves.

“Picture a kid who has lost his mum. He drifts into thought, loses concentration, his school work goes downhill and he is classed as naughty” said Jean, “a ball of anger caused by hurt develops, and that child becomes a troubled young person.”

Jean believes that for many in that situation there is no escape or protection, with press reports reminding them of the terrible event and those in the community ever aware that this is the son or daughter of a homicide case. “Children often appear to bat-off grief quite easily” continued Jean, “But it can fester. I want them to know in us, they can always find a friend.”

Detective Constable Sara Muscatelli is one of those officers who has to engage with such kids and admits, “Society is not always as perfect as it could be to these children. It is incredibly difficult to tell little ones the worst possible news. That is why the book is so invaluable. Its language is perfect and now every family liaison officer in our region has this vital resource.”

The head of the Merseyside Violence Reduction Partnership, Detective Superintendent Siobhan Gainer, added: “Our agenda is to prevent people from falling into a life of crime and violence but sadly, those who have endured a trauma such as a family murder can feel isolated, rejected and become disengaged from the rest of us. Jean is right, it can cause a spiral of anger that if left unchecked, becomes a serious problem. Apart from preventing this, we are also providing a kindness for families who must feel like their world has been torn apart. Our hope is that the book will go on to help victims not just here but in the rest of the country, too.”

If she had to face the nightmare of informing someone who has lost a loved one to murder again, Jean would have been frank and honest and make sure she did not lie about the fact that they had been killed. “But now I would also give them the book” she added, “and use it as a starting point to talk about what had happened.”